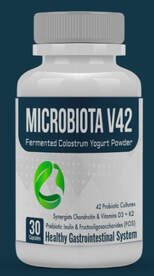 
Many people find that due to their travel or busy lifestyle it may become difficult to make Gcmaf Yogurt.

We understand this, not many of us want to make yogurt while away from home and becomes difficult to maintain good health.

Gcmaf Yogurt Capsules are encased in acid resistant capsule containing freeze dried gcmaf yogurt, with co-factors and vitamins  to ensure maximum effectiveness and protecting the bacteria from the high acid environment of the stomach.

Microbiota V42 is our gcmaf yogurt capsules, and are easy to take while away from home, they do not require refrigeration and come in a convenient 30 capsule sized bottle.

Mircobiota V42 is a ready to consume freeze dried gcamf yogurt in acid resistant capsules with added co-factors for daily use.

N-acetylgalactosamine is the least known of the eight essential sugars. As with the others, this one is also important for proper cell-to-cell communication. This communication is important for both normal systemic function and in immunity.

Recommendation of use of Microbiota V42 Gcmaf yogurt capsules:

Oral administration: To be taken with water: take 1 capsule daily on an empty stomach (30 minutes before food or 2 hours after). Many prefer to take this first thing in the morning before breakfast or before bedtime.


Microbiota V42 contains 30 acid-resistant capsules which is a 30 day supply.

The normalization of the natural human microbiome
The Microbiota V42 formulation is encased in acid-resistant capsules to protect the physiological bacterial cultures from gastric digestion and open up in the first section of the small intestine, the duodenum. As a result, the probiotic cultures reach directly into the microbiomes entry area and are therefore very effective.

The last thing you want while traveling is the flu or a stomach bug this can really ruin your holiday or business meetings, making your life miserable.

Unfortunately this is what happens to many of us who travel. Even eating new foods for many can challenge their gut and have them looking for a close toilet in a strange city.

Because up to 80 percent of your immune system cells are in the lining of your gut, it makes sense to keep your gut as healthy as possible. The best way to do this is with probiotics. Probiotics support the ‘good’ bacteria in your gastrointestinal tract, keeping them nourished and functioning properly. They also help to ward off any ‘invaders’ such as pathogenic bacteria and yeasts by crowding them out.

However, if you start your vacation with a gut full of unhealthy bacteria, your immune system will already be at a disadvantage. You’ll be more susceptible to potential invaders because your immune cells won’t be getting the right messages from your gut bacteria.

Scientific research has found that beneficial bacteria can not only treat traveler’s diarrhea, but prevent it from developing.  Probiotics can also help to maintain your overall health and provide digestive support while you’re away from home.

A review of over 900 studies found that live bacterial cultures were highly successful in preventing traveler’s diarrhea. Most importantly, there were little or no serious adverse reactions to taking the supplements.

Probiotics can also help to prevent constipation that may result from changes to your bowel routine. This is an unfortunate consequence of time zone changes, disrupted eating patterns and changes to your sleep. Dehydration from long air travel can also contribute. When your bowels get ‘blocked up’, your immune system can really suffer.

WHICH PROBIOTICS CAN YOU TAKE TRAVELING?

To really prepare your gut bacteria for the travel ahead, you should already be taking a probiotic supplement every day. If you haven’t, then start taking a probiotic at least two weeks prior to your departure. For many they find that the use of a high quality multi-strain probiotic such as Microbiota V42 everyday assists them in staying healthy and free of gut issues.

A multi-strain probiotic such as Microbiota V42 is important as it contains other immune factors such as Gcmaf and Vitamin D3 to ensure maximum immune benifits.

Researchers have made tremendous progress in the last decade in understanding why age brings with it certain diseases. One thing they've discovered is that aging causes the body to downregulate some of its hormones and other biofactors while at the same time upregulating others.
One of the substances that age upregulates is Interleukin-6 (IL-6). IL-6 is a cytokine, a biochemical messenger for the immune system. In the aging body, IL-6 increases at the expense of other cytokines. This imbalance in the system creates inflammation. IL-6 has been discovered in arthritic joints and diseased blood vessels. In a striking study done at the National Research Institute in Italy, people with the highest amount of IL-6 were almost twice as likely to develop a disability related to mobility. It also turns out that people with Alzheimer's-like dementia have elevated IL-6.
Surprisingly, Vitamin K also inhibits both IL-6 and inflammation. Researchers don't know how it works yet, but some are suggesting that vitamin K could have major implications for degenerative diseases involving inflammation, not to mention aging itself.

Vitamin K and blood sugar
The pancreas has the second highest amount of vitamin K in the body. This suggests the vitamin may have something to do with controlling blood sugar. In the first study of its kind, researchers in Japan looked at vitamin K's effect on glucose and insulin. In a study on rats, they found that vitamin K deficiency initially impedes the clearance of glucose, then causes too much insulin to be released. This can be plotted on a graph that looks very similar to what occurs in diabetes.

Mega antioxidant
Some studies show that vitamin K is more powerful than vitamin E and coenzyme Q10 for scavenging free radicals. In a study on animals subjected to oxidative stress, vitamin K by itself completely protected the liver from free radicals (but not muscles). In another study, vitamin K was 80% as effective as vitamin E in preventing the oxidation of linoleic acid (a polyunsaturated fatty acid). According to researchers in the Netherlands, warfarin (a blood thinner) abolishes the antioxidant effect of vitamin K. Vitamin E and glutathione protect vitamin K's antioxidant effect.

Vitamin K and anticoagulants
The common anticoagulant drug Coumadin/Warfarin works by interfering with vitamin K. Therefore, people taking Coumadin should not take vitamin K without consulting their doctor.
People who chronically take these drugs are, in effect, vitamin K deficient. Do such people show effects on bone and blood vessels? The answer is yes. Studies show that long-term anticoagulant users have osteoporosis and a tendency to hemorrhage. One study shows that long-term anticoagulant use doubles the risk of stroke. Occluded arteries have been documented in people taking heparin, and some researchers conclude that the drugs work no better than aspirin in preventing heart attacks.


How It Works
A study published in 2018 sheds further light on how vitamin K improves glucose metabolism.
Dutch researchers gave 214 post-menopausal women either 180 mcg/day of vitamin K2 or a placebo over a period of three years.
As expected, they found that vitamin K activated a group of proteins called Gla proteins,one of which, osteocalcin, is known for their role in bone and mineral metabolism.

However, Gla proteins are found throughout the body, and are instrumental in regulating metabolism.

In the group that received vitamin K, a subset who showed the largest increase in Gla protein activity, as measured by Vitamin K-dependent carboxylated osteocalcin, experienced significant reduction in abdominal fat mass, compared with other participants.
That group also had a significant reduction in body mass index, waist and hip circumference, and waist-hip ratio.

All these results translate to a reduced risk for developing metabolic syndrome and type II diabetes.

Vitamin K has also been shown to boost levels of adiponectin, a beneficial hormone that helps regulate the metabolism of sugars.

Finally, a series of preclinical studies have indicated that vitamin K reduces activity of nuclear factor kappa B (NF-kB), the primary driver of inflammation in the body.

Vitamin D: Essential Hormone
PREBIOTICS
​
Prebiotics are compounds in food that induce the growth or activity of beneficial microorganisms such as bacteria and fungi. The most common example is in the gastrointestinal tract, where prebiotics can alter the composition of organisms in the gut microbiome.
​

Oligofructose (FOS) is a short, small molecule. When it enters the colon in the right lower side of the abdomen down by the appendix, it is immediately fermented in the large intestine and used up by the bacteria that reside in this part of the colon, where it helps healthy bacteria multiply. There is no problem with this situation, except that there is little left to get across to the rest of the colon on the left side. That makes oligofructose on its own not nearly as effective as when it is combined with another prebiotic fiber, such as inulin.

Inulin, on the other hand, is a larger, more complex molecule. Because it takes the colon’s bacteria much longer to ferment inulin, there is more available to the bacteria that reside in the rest of the colon, mostly on the left side. Like oligofructose, inulin is somewhat effective on its own but really needs another quick-fermenting fiber to provide the optimal beneficial health effects. Unfortunately, foods with these prebiotics are rather low in the oligofructose component, so an ideal formula would contain both inulin and oligofructose. This is why both are included in our Mircobiota V42 gcmaf yogurt capsules.