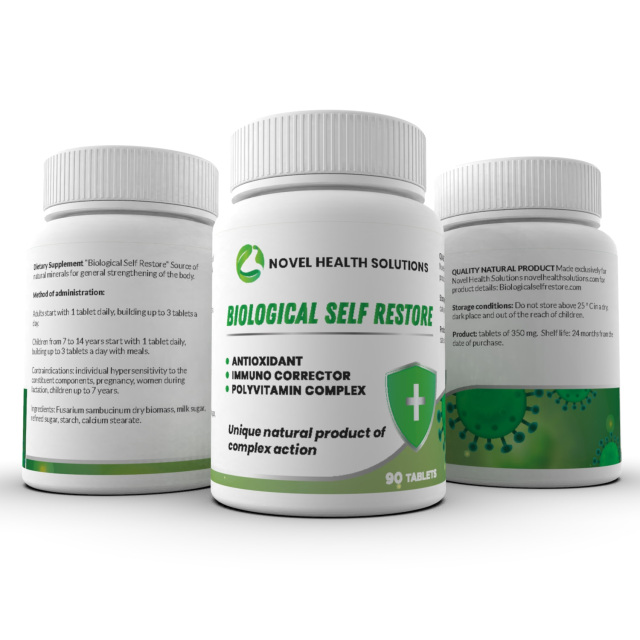 The range of effects obtained with Biological Self Restore is so wide that it can be classified as an integrating systemic substance with a powerful antioxidant, immunomodulating and adaptogenic effect in various diseases:

The conducted studies confirmed the harmlessness of biological Self Restore on the body and the absence of allergenic, gonadotropic, mutagenic, embryotoxic, teratogenic and carcinogenic effects.

Biological Self Restore contains a unique set of biologically active substances and trace elements: polypeptides, polysaccharides, phospholipids, chitosan, vitamins, which are not found in other natural products in this ratio.

This is a natural parapharmaceutical with universal effects on the human body, which detects and restores a disturbed program of hormonal, functional, metabolic and energy connections. It affects tissue metabolism and modulates the immune response, corrects genetic mutations in the cell, activates the system of destruction of defective cells, which leads to a halt in the development of tumor processes. It triggers regenerative and regenerative functions, exerting a regulatory effect on metabolic processes and homeostasis in general.

Biological Self Restore acts in the body according to the principle “step by step” ie finds violations at the submolecular level and subsequently corrects them.

The sequence is as follows:

(10 – 20 days) somatic systems of the body, metabolic and regulatory processes, by restoring the level of catecholamines, which directly or indirectly increase the activity of the endocrine glands, stimulate the hypothalamus and pituitary gland,

Basic concept of The effects BSR on the human body

This mechanism is possible due to the powerful antioxidant effect that the Biological Self Restore possesses.

In a holistic microorganism, the systems for generating free radicals, in particular, free forms of oxygen, and anti-radical, antioxidant defence are in dynamic equilibrium.

It was established that BSR has a systemic effect due to the correction of bioprocesses in the human body at the nano level, in particular by suppressing defective and increasing the replication accuracy of existing DNA Sequences due to its powerful antioxidant effect.

For complete information and the uses of Biological Self Restore visit :

The general recommendation on the use of Biological Self Restore are as follows:

General recommendations: As a product with health-improving effect – a source of vitamins and minerals will help maintain the body’s defenses and protect against failures in the immune system.

Absorption begins with the oral cavity, however it recommended to take the tablet in powder form. To do this, you need to chew or suck the tablet.

You can leave the tablet for some time in the mouth for the rehabilitation / health improving effects of the oral cavity.

If you do not like the taste of the tablet is can be swallowed whole with water but for best effects it should be chewed.

*The addition of Probiotics during the first 14 days has shown to be of benefit.

*The maintenance dose once buildup has been completed can be as low as 1 tablet x 3 times daily with food. Some people with more complex health issue will need to stay on the maximum dose of 2 tablets x 3 times daily. Seek advice from your health care professional.

*Those who are very unwell or sensitive may want to start with a smaller dose and start with half a tablet daily and build up.

BSR should be taken with food. Product reception start with small doses and gradually increased according to the recommendations indicated in the table above.