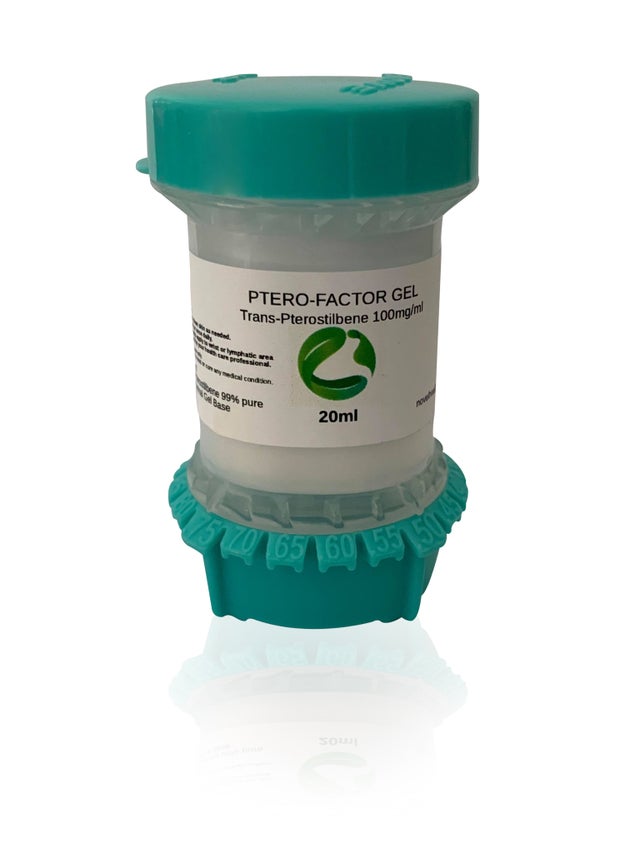 20ml Pharmaceutical grade transdermal cream base.99% pure Trans-pterostilbene @ 100mg/ml  Clinically-proven to deliver Trans-pterostilbene to local and systemic sites.Non-greasy and no residue after applicationEasy to use click applicator to get the exact dose each and every time.

The Transdermal gel allows the pure Trans-pterostilbene to penetrate the skin reaching the general circulation when desired, making the topical route possible.

Pterostilbene (tero-STILL-bean) like resveratrol, belongs to a group of compounds called phytoalexins, These are naturally produced by plants when under attack by pathogens

Pterostilbene is one of several stilbenes found in certain berries (e.g., blueberries, cranberries, sparkleberries, lingonberries, and grapes), thus, consumption of these small fruits may help

Pterostilbene is the next generation of resveratrol:

• metabolizes more slowly in the body, more time for its antioxidant activities to work

Pterostilbene with two methoxy groups and one hydroxyl group has improved lipophilicity and a higher potential for cellular uptake than resveratrol, which has three hydroxyl groups.

Several published studies refer to Pterostilbene as having better activity than resveratrol.

For example, the result of one study indicates that pterostilbene is more effective than resveratrol as an inhibitor of DNA synthesis in the human adenocarcinoma HT-29 cell

line. Additionally, Rimando et al. have shown that unlike the related stilbenes resveratrol, piceatannol, or resveratrol trimethylether, Pterostilbene is a potent peroxisome proliferator-activated receptor alpha agonist, lowering lipid levels in the blood stream at higher rate than even ciprofibrate.

• May be a potent anti-aging compound

• Can be used to maintain healthy cholesterol levels

• Works to decrease plasma glucose levels in some animals

• Identified as an antiviral compound with broad target specificity

• Inhibits expression of certain inflammation related genes in the colon

It’s truly remarkable how closely pterostilbene can mimic the beneficial effects of calorie restriction on a molecular level. Calorie restriction directly suppresses cancer-causing genes while up-regulating genes that suppress cancer development. In numerous studies pterostilbene modulates exactly the same genes, up-regulating those that stimulate the programmed cell death known as apoptosis, and down-regulating those that allow cancer cells to invade and metastasize.

Pterostilbene naturally activates these same fat-sensing complexes and was found to favorably affect lipid profiles in hamsters with elevated cholesterol.

In rats subjected to UVB radiation (the type of radiation that causes sunburns), a pterostilbene cream on the skin prevented the development of skin cancer.

There’s growing evidence that pterostilbene provides chemoprevention by many routes. Pterostilbene has powerful antioxidant capacity equivalent to resveratrol, and its anti-inflammatory actions help it block the inflammation/cancer connection. In addition, pterostilbene inhibited the growth of highly malignant human melanoma cells and prevented metastatic spread of those cells to the liver in laboratory animals. It thus enhanced survival.

As with so many nutraceuticals, pterostilbene achieved this dramatic effect by multiple mechanisms. It inhibits production of molecules that cancer cells use to “stick” to vessel walls, and also makes them vulnerable to immune-system destruction.

At the whole-organism level, pterostilbene suppresses formation of pre-cancerous cells in the colons of carcinogen-exposed animals. More excitingly, pterostilbene and quercetin dramatically enhanced elimination by radiation and chemotherapy treatment of implanted colon cancers.

Cancer cells communicate with each other across special connectors called gap junctions. Pterostilbene disrupts those gap junctions, thereby interfering with inter-cellular communication that cancers need to direct their renegade growth. Disruption of gap junctions is a mechanism that appears to be truly unique to pterostilbene, one not shared by other chemopreventive or chemotherapy agents.

Clearly there’s substance to the recent conclusion by Korean cancer researchers that “pterostilbene may be a functional chemopreventative agent and that dietary exposure of pterostilbene would be helpful for improving health.”

Both resveratrol and pterostilbene have remarkable effects on learning and memory. Pterostilbene was the most efficacious of a group of resveratrol-like compounds at preventing loss of the neurotransmitter dopamine from memory centers in aged rats. Supplementation with pterostilbene reversed cognitive behavioral deficits. This study showed working memory function was correlated with levels of pterostilbene in the hippocampus, a key brain location where memory is processed.

A closer look reveals yet again the astonishing correspondence between pterostilbene and caloric restriction on gene expression. Supplementation with blueberries (one of the richest sources of pterostilbene) improved performance of aged animals in working memory after just three weeks. The improvement was closely correlated with activation of a brain-signaling protein in the hippocampus. Improvement in memory performance was just recently shown to be another direct result of caloric restriction!56 Improved spatial memory during times of low food availability might be a very appropriate adaptive response, making animals more efficient at locating scarce food resources. If so, then pterostilbene’s ability to mimic these fundamental changes in brain chemistry is a powerful modern take on an ancient survival mechanism.

Another way pterostilbene can extend lifespan and ameliorate age-related diseases is by preventing the buildup of age-related cellular waste products. These aggregates of damaged and cross-linked proteins, known as lipofuscin, are detrimental to normal cell functions.

The rate of lipofuscin formation is closely related to the level of cellular oxidative stress. Studies suggest that lipofuscin may be involved in the earliest stages of Alzheimer’s disease by causing mitochondrial dysfunction and by activating an innate immune response that can damage neurons.

The body is equipped with small garbage disposals within cells called lysosomes that are designed to remove harmful lipofuscin. When lysosomes stop working properly, it leads to the accumulation of lipofuscin. The progressive accumulation of this cellular debris is considered to be a reliable marker of aging.

In addition to accelerating the aging process, these junk-laden cells contribute to neurodegenerative diseases like Alzheimer’s and Parkinson’s, and they have been found in vascular lesions in the retina.

A molecular complex called mammalian target of rapamycin (mTOR) is currently a major focus of pharmacological research to slow aging—and for good reason. So far, reducing the expression of mTOR has been shown to extend lifespan across multiple species. Laboratory-bred mice whose expression of mTOR has been reduced to about 25% enjoy an approximate 20% increase in median lifespan.

mTOR is a cellular signaling pathway that serves as a central regulator for cell growth, metabolism, survival, and proliferation. This pathway is responsible for controlling many of the processes that use or generate large amounts of energy and nutrients.18 When mTOR signaling goes awry, it triggers numerous harmful events, including those linked to a variety of cancers.

Abnormal mTOR activation is a contributor to many of the chronic diseases of aging. Scientists are aggressively seeking pharmaceutical approaches to lower the activity of mTOR.

Pterostilbene (as well as other CR mimetics and calorie restricted diets) has been found to naturally inhibit the mTOR pathway. This reduction in mTOR provides a powerful way of regulating cellular growth and metabolism, and combating some of the primary factors involved in aging and disease.

While pterostilbene has been shown to naturally inhibit the mTOR pathway, it has been found to beneficially activate a separate important pathway associated with an increase in lifespan and a decrease in degenerative disease. Called AMPK (short for adenosine monophosphate-activated protein kinase), this cellular energy sensor regulates the ways our bodies use and transform energy.

When we’re young, higher levels of activated AMPK are present, which helps protect us against many conditions, including obesity and diabetes. But with time, AMPK activation decreases, which can lead to weight gain and accelerated aging.

By increasing AMPK activation through the use of various nutritional compounds including pterostilbene, we can achieve a reduction in many of the destructive factors of aging, enabling our cells to return to their youthful vitality. Preclinical research shows that enhanced AMPK activity is associated with an approximate 20% increase in lifespan. It has also been shown to shrink body-fat stores, lower blood sugar and lipid levels, and suppress chronic inflammation—all of which are key indicators of a reduction in the aging process.

Activating AMPK can also help protect against Alzheimer’s disease because it suppresses the formation of beta-amyloid plaque and tau tangles, two of the primary markers of this neurodegenerative disease. It has also been found to limit oxidative stress that leads to hypertension, increase cell survival during hypoxia (oxygen deprivation), and promote autophagy to reduce memory impairment.

These are critical longevity factors, since shortened telomeres are associated with reduced lifespan.

In a cell study model of ischemia-reperfusion injury, pterostilbene was found to protect heart cells from apoptosis by stimulating the activity and enhancing the expression of sirtuin-1. Study investigators concluded that pterostilbene could be used clinically to alleviate heart muscle injury due to a heart attack.

Sold Out
Add to Cart